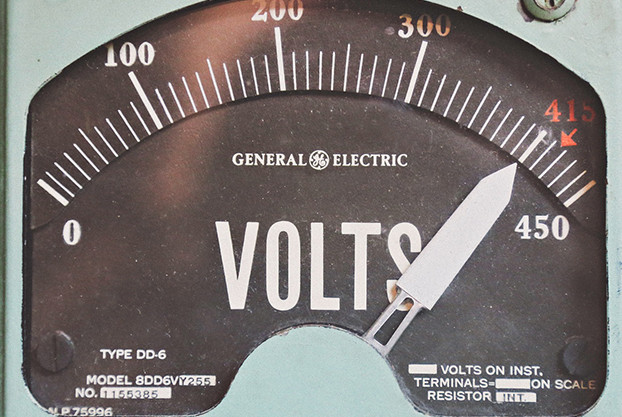 There are a number of problems which may occur with the incoming power supply to a site. These problems cause voltage and current instability which can have a significant impact on equipment operation and power usage.

Voltage stability refers to the ability of a power system to maintain steady voltage levels after a disturbance. The main forms of voltage instability can be categorised as:

Undervoltage describes a sag in voltage for a short period or a sustained reduction in the system voltage level for a period of time (sometimes described as a brownout). Common causes of undervoltage conditions include the start-up of large loads or other long-term system faults.

Conversely, overvoltage refers to a swell in voltage levels supplied which may occur over a short or sustained period and is the reverse of an undervoltage condition. Common causes of overvoltage include sudden or persistent load adjustments which are not compensated for, or phase fault events.

A transient is a sharp change in voltage or current away from normal operating levels for a short period of time (usually no more than 1ms in duration). It normally occurs due to an event which causes a change in the circuit conditions, internally or externally to the circuit. As a result, an oscillating (both positive and negative change) or ‘spike’ (high positive change) of voltage occurs, which can be transmitted throughout the system.

Examples of events which may cause a transient to occur in an electrical system include lightning, inductive electrical equipment, electrostatic discharge, and circuit faults such as short circuits or circuit breaker operation.

Waveform distortion involves the changing of the fundamental supply AC waveform due to influences such as:

The importance of good power quality

The impact of the above mentioned power issues on an electrical system can be significant. They can cause disruption of power to equipment resulting in operational delays, equipment instability and failure. Poor power quality also results in higher than necessary energy costs due to the inefficient use of power in a power system. Some of the main impacts of poor power supply are discussed below.

When equipment within a system operates outside of manufacturer recommended levels it can shorten the life of equipment and result in unstable operation and failure.

Motors – Motors operate most efficiently within the rated levels prescribed on the nameplate of the equipment. When operated outside of these levels the motor may not perform as efficiently or may malfunction. Undervoltage increases the operating current causing overheating which will shorten the life of the motor. Furthermore, large loads may fail to start if the starting torque is not sufficient due to low voltages. These stresses on the motor will eventually lead to mechanical failure. The impact of overvoltage is similar in that it pushes the motor into magnetic saturation, causing it to draw excessive amounts of current beyond its nameplate ratings to compensate.

Sensitive electronic equipment – Electronic equipment including computers are prone to problems when exposed to noisy power supplies. Power supply noise can cause components to operate outside of rated values, causing overheating and equipment operation issues such as data error or loss, equipment malfunction and component failure.

Transformers, generators and other switchgear and cabling – Electrical switchgear operating in over or under voltage conditions is susceptible to overheating and unstable operation.

Additionally, in a similar way to motors above, this equipment is also impacted by transient voltage conditions including harmonics and DC offsets which can shorten equipment life and lead to equipment malfunction and eventual failure.

Fuses and Circuit breakers – The most common outcome of poor power quality on fuses and circuit breakers is nuisance tripping (tripping of the protection device at a time other than when protecting against a fault event). Waveform distortion such as from harmonics, transients and sustained periods of over or under voltage can all create conditions in which the protection device sees voltage or current levels outside of normal operating thresholds, creating a trip event. Nuisance tripping can have a significant impact on equipment performance as it causes unplanned shutdown of equipment, data error or loss and possible damage to equipment.

The energy triangle in Figure 1 shows how the energy supplied to a system is not necessarily the energy used, depending on the efficiency of the network. In summary: 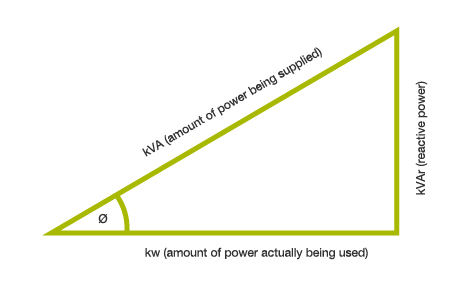 Most energy suppliers are moving to a kVA (apparent power) demand based system for charging for electricity usage, compared with the tradition kWh (real power) calculation. This means that customers now pay for the total amount of energy being supplied rather than actually used which, depending on the main electricity supply and the power quality can be a significantly higher amount. It is common for energy suppliers to oversupply voltage to customers to account for poor power quality issues (such as voltage instability) of connected users, contributing to higher energy costs.

If a site is operating with poor power quality the demand for power by the site is also increased. Across a number of impacted sites this can add up to significant increases in demand on electricity suppliers. The associated increase in power generation to meet this demand, if not supplemented by renewable energy sources will result in a greater impact on the environment.

Unstable system voltages can result in nuisance tripping, loss of fault or event logging or other system monitoring data and even system shutdown. Such stoppages can add up to non-trivial delays to system operation and thus losses in production. Further interruptions to production may be experienced as a result of unplanned maintenance due to the failure of equipment as a result of sustained periods of power supply instability.

Conclusion: How to improve power quality

It is clear that voltage/current instability can have a major impact on an electrical system. Depending on the issues being experienced, a number of measures can be taken to manage supply issues and improve power quality. Measures include but are not limited to:

For an assessment of your system or further information on specific types of power quality improvement equipment and strategies talk to an expert from Captech.